For Gold and Glory.

Battle Brothers is a single-player military stragety/rpg set in a low fantasy setting, developed by indie publisher Overhype Studios. When I read that this was a mercenary game with a character levelling system, I honestly expected something like Final Fantasy Tactics. What I got was something completely different than my expectations, however something that still felt very familiar.

It also gave me the tale of No Nose.

The game gives you the ability to name your own mercenary band, as well as choose between a small selection of standards to make the group feel like yours. Then I discovered that I can rename all my little randomly generated soldiers, regardless of when you recruit them. Additionally, some towns you visit have a barber shop, allowing a full visual customization of your Brothers.

Though this brings me to one concern: It’s all white dudes. In this day and age, a lack of diversity in character customization can be a detriment for any game. Here is hoping the developers add to some more options here soon. 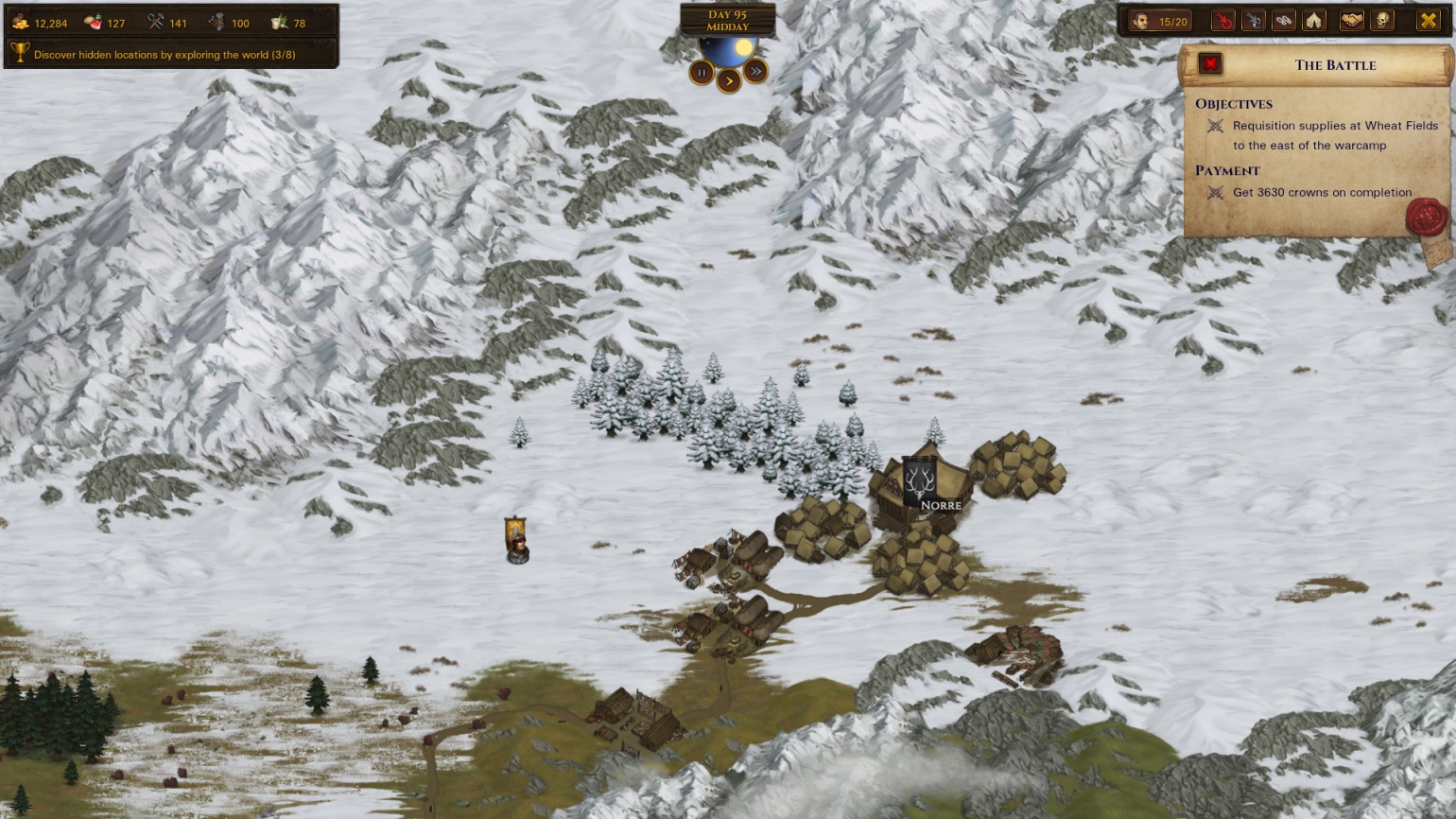 No Nose and the Red Claw Mercenaries

Battle Brothers gives you three randomly generated brothers with which to start your mercenary band, and from these humble beginnings you are expected to earn fame, wealth, and glory on the battlefield. My own group, the Red Claw mercenaries, had just such a humble beginning, though of my three starting characters there was one that stood out. His old name was left somewhere on the battlefield against some bandits. He emerged tempered, changed, and without a nose.

No Nose had a distinguished career, and over the course of my campaign earned my respect. His archery skills won my side many battles in those early days when the Red Claws could barely scrape together half a dozen conscripts. While lacking in the facial features left him a little more tired than the others, he continued to prove his worth, gaining in skills, accuracy, and staying power.

If only he knew how things were destined to end for him. 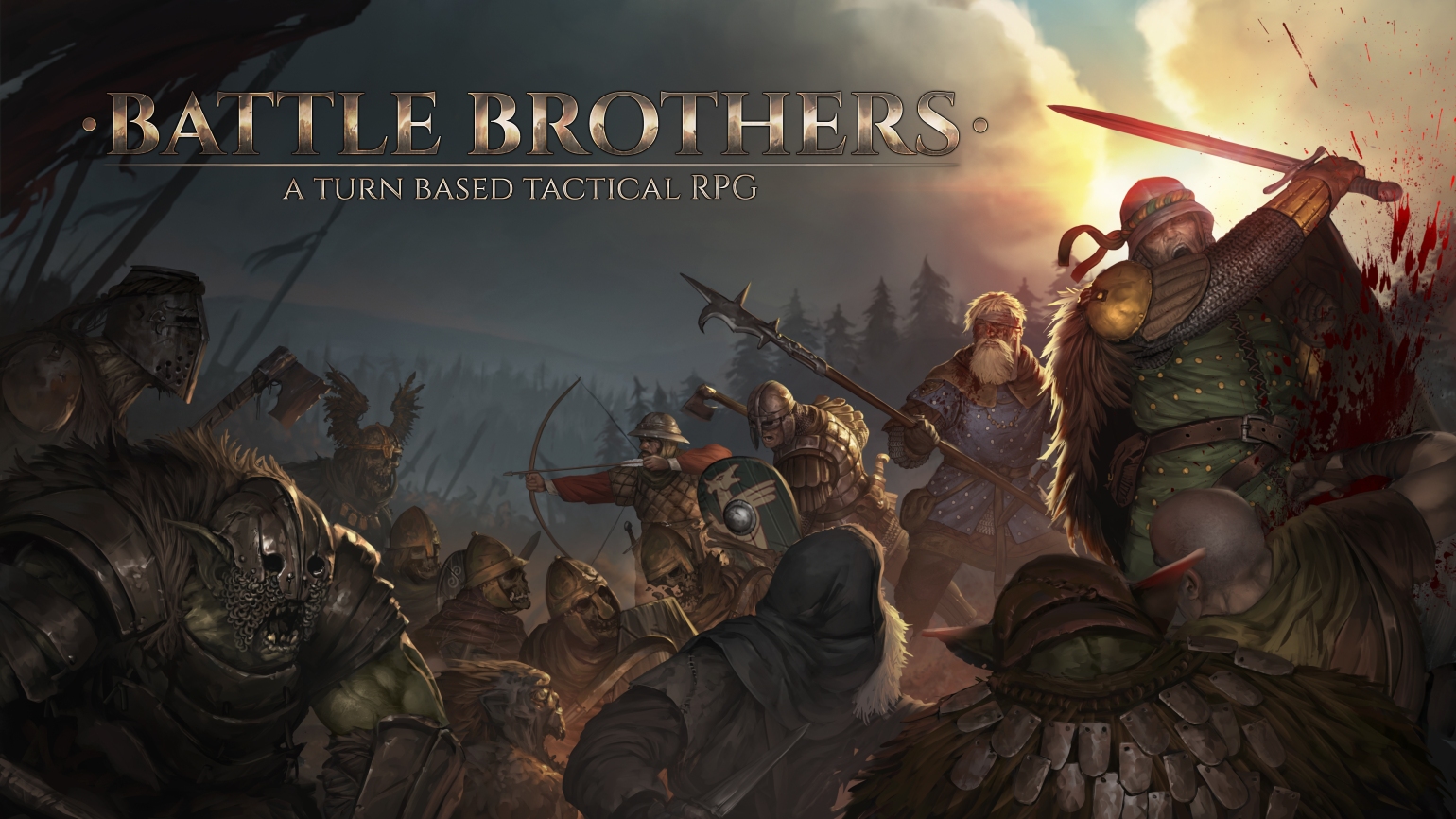 The UI for the game is simple and easy to follow. Character traits, injuries, skill perks, and stats all have their information summarized in a mouse-over bubble that is very handy. With an ironman mode and several levels of difficulty, this game sends you off in to a troubled world where bandits are the least of your worries.

I noticed when starting my game, there was an option dealing with the ‘End Game Crisis,’ and my excitement grew. I find that when a strategy game talks about having an End Game Crisis, it’s probably going to let you just do whatever, however you want. And that is exactly how Battle Brothers works… Until the crisis hits.

For those familiar with the Mount & Blade series, the overland map will probably look familiar. Your band of troops is represented by your banner, you travel around from town to town seeking jobs while watching other units move about – some neutrals, some enemies. You also have random events pop up, many of which are based on the backgrounds of your troops. I once had a gambler want to dice with me, the beggar in my troop needed extra coins, and the drunk managed to lose some of his gear. Aside from the aforementioned lack of diversity, you become very attached to your little mercenaries.

And yet, they die so easily. There is a reason the main screen has an obituary button, after all. You will often want to reflect on the characters you lost, or look at the info of one of the recently dead.

Even outside sudden or unlucky deaths, Battle Brothers is cruel and violent. Characters get injured, require time to heal, and can be permanently damaged.

For No Nose, it was a fight against some particularly nasty greenskins. The Red Claws’ first encounter with the foul menace. The battle had gone on a long while; No Nose had brought down several lesser goblins, but he’d run out of ammo, so he pulled out his faithful military cleaver and entered the fray.

That’s when disaster struck. An arrow got him right in the face. At first I thought ol’ No Nose was gone, but that tough bastard was still kicking – though he was missing an eye and now completely traumatized. After the battle was over, I sat and looked at my roster and realized that we had grown enough that No Nose could live out his days content in the reserves tent. But this man had given so much to the Red Claws already, I decided to give him 660 coins as severance, took his gear (it was company property, after all) and bid him farewell. I like to think he settled down in the port we started out in.

There is something sad about having someone who survived so many fights, get hit with a stray arrow, and be so injured from it you just have to retire him. You will absolutely love your little troops, but try not get attached, because you’ll go through a fair number of them before you’re done.

The game uses a simple system of logistics to your mercenary band in order. You buy food (which can spoil, so don’t overspend), ammo, maintenance supplies, and medical supplies. These resources are needed to keep your troops and their gear in fighting shape, happy and hale. It is a simple enough system that it doesn’t distract from the core of the game, but is nonetheless always a real concern.

The combat is where this game really shines. Terrain, elevation, visibility, and distance all of it comes into play. Your gear load-outs also matter just as much as the abilities you get from levelling do. I have found that formation, timing, and sometimes allowing a character to catch their breath can be key to victory at different times in difference circumstances. The fact that, even on the easiest of difficulties, you can not just rush in and carelessly murder everything is evidence of a carefully crafted strategy game.

Battle Brothers offers a fantastic chance for players to grab hold of their own story and make it happen in the game world. The customization, levelling, and gear allow for a great variety in builds. Outside of the human enemies, the fantasy creatures have interesting powers that make fighting them a unique experience. Fans of free wheeling strategy/rpg games will find a lot to love here. There are few flaws and the replay value is incredibly high.

Note: This game was acquired from the developer as a press copy and was not purchased by this site.